Big Ben is famous for its reliability.

This is due to the skill of its designer, the lawyer and amateur horologist Edmund Beckett Denison, later Lord Grimthorpe.

Together with an enclosed, wind-proof box sunk beneath the clockroom, the Great Clock’s pendulum is well isolated from external factors like snow, ice and pigeons on the clock hands, and keeps remarkably accurate time.

Despite heavy bombing the clock ran accurately throughout the Blitz. It slowed down on New Year’s Eve 1962 due to heavy snow, causing it to chime in the new year 10 minutes late.

The clock had its first and only major breakdown in 1976. The chiming mechanism broke due to metal fatigue on 5 August 1976, and was reactivated again on 9 May 1977. During this time BBC Radio 4 had to make do with the pips.

It stopped on 30 April 1997, the day before the general election, and again three weeks later.

On 29 October 2005, the mechanism was stopped for approximately 33 hours so that the clock and its chimes could be worked on. It was the lengthiest maintenance shutdown in 22 years.

I finally gave up and bought a new 1TB drive but it was another 24 to 48 hours before I could transfer all my RAW files across from various backup media and rebuild my Lightroom Catalog.

I connected DPP to my CF Card in order to pull off this sunset photographed at the Carnival.

It is the Grand Union Canal as it passes through Ladbroke Grove in West London.

"The Grand Union Canal in England is part of the British canal system. Its main line connects London and Birmingham, stretching for 220 km (137 miles) with 166 locks. It has arms to places including Leicester, Slough, Aylesbury, Wendover and Northampton."

It was overcast throughout the day and even rained on Children’s day; I did my best to cut out the sky with a long tele but sometimes, the crowd gets so thick and I had to switch to the 24-70mm and focus very close. 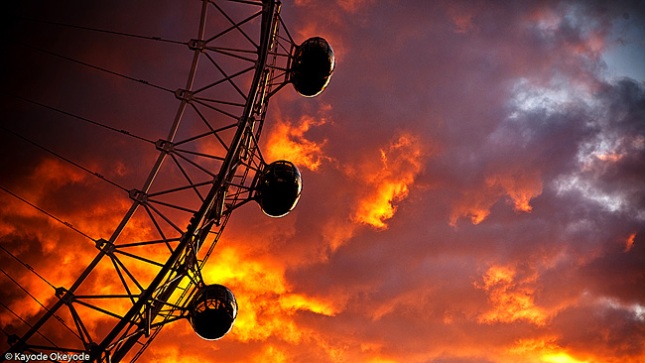 This picture of the London Eye against the backdrop of a fiery sky was taken in the Summer of 2008 but I have just got round to processing it.

Profile of the London Eye at Sunset

A photograph of the London Eye taken with the Panasonic LX3 and then with the Canon 5D Mark 2.

This isn’t a scientific test; the point of views are not the same and the camera settings were different as well. LX3 was also in 16:9 format when I took the shot (the 5D shoots in 3:2 format).

I had no plans to compare the results when I took the shots, therefore the 5D Mark 2 image was under-exposed and corrected in Lightroom; otherwise, I have used the same settings to convert both images from RAW.

Normally, I would correct the lens distortions in Photoshop but for this exercise, I have kept the distortions. 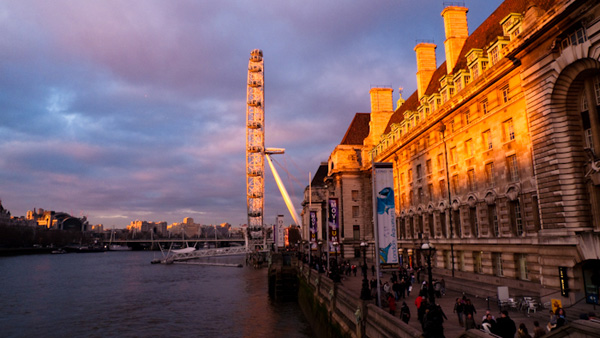 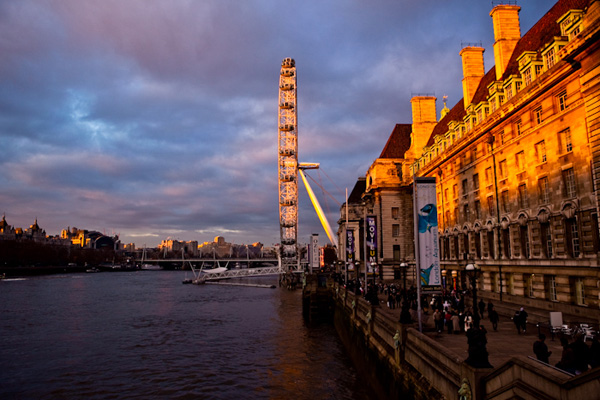